You are here: Home / Handling Money on the Road / A Fake Wallet Can Save Your Traveling Butt for Real

I first heard about fake wallets on the Ricky Gervais Show, so I didn’t take the idea seriously.

In the recording, Steve Merchant tells a story about how he used to carry a fake wallet when he first moved to London because apparently muggers congregated there.

Things got complicated when Steve over-thought this simple trick.

I got really anxious because I thought, “What if I hand over my fake wallet and he goes, ‘Well, is this a fake wallet?’…then makes me hand over my real one, but maybe also punishes me, you know, takes it out on me because he’s angry.”

Then I took to carrying a second fake wallet. So I spent about two months carrying three wallets around, two of which were fake.

And then, you know the reason I stopped? Because I thought, “What if I give him both fake wallets…and now he’s gonna be twice as angry as he would’ve been if he only had the one fake wallet!”

As I later found, carrying around a fake wallet is a real thing and some travelers swear by it.

I’ve never used one myself, though. Having grown up in a city like Jakarta, I feel like I’m generally aware of my surroundings.

And because I also have never traveled to a place I consider especially dangerous, it just hasn’t crossed my mind. But I might carry a fake wallet when my travels bring me to a place where I stand out like a clueless tourist who has wandered away from her bus tour group.

The point of having a fake wallet is so you can give a mugger something and still escape with most of your belongings (and your well-being) intact. 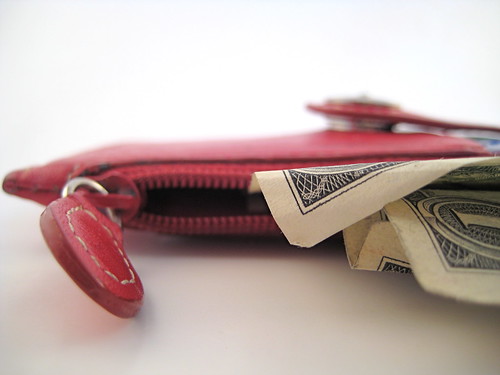 “What if I do give him the fake wallet and he just starts using the library cards and the video cards?…He could rack up a huge fine and I’d be in the same position as if I were to just give him the money.”

Make it seem like your fake wallet is the real thing.

This means that you have to use it in public. Put enough money in your fake wallet to cover your expenses for the day, then use it to pay for stuff.

If you need more spending money than usual, stash your main supply in your hidden real wallet and replenish your dummy wallet as the need arises. Only do this in private areas, such as in changing rooms or washroom cubicles.

If you do get mugged…

Then you’ll be able to use the things in your real wallet to at least flag a cab and get back to the safety of your hotel room, where you can choose to call the police (or not, since you wouldn’t lose anything valuable anyway).

And if the mugger somehow gets your real wallet…

Call your banks as soon as possible to cancel your credit and debit cards.

You should prepare for this before you leave for the trip — write down the phone numbers of your banks on a piece of paper or store the information online. Make sure you use the banks’ access numbers for international calls because you may not be able to reach some 1-800 numbers from overseas. (Check out my post about precautions to take when you travel with credit cards.)

Quick note: guys, I just got myself a Facebook Page. If you haven’t done so, please go and check it out! Or at least take two seconds to “like” it here through the Facebook box in my sidebar (scroll all the way up to the top of this page; it’s to the right of this post). Thanks! :)