You are here: Home / Affording Travel Interview / How Alex and Ben Make a Long-Distance Relationship Work

I generally view Valentine’s Day with a lot of suspicion. All the flowers, chocolates and cards…those retailers must really be raking it in!

But I guess there’s no harm to it, as long as I don’t have to overspend to partake in the festivities. And hey, there has to be a Valentine’s Day for there to be post-Valentine’s chocolate sale.

So today I’m featuring a traveling couple in a special Valentine’s Day interview.

Alex (a New Yorker) and Ben (an Englishman) beat the odds of a long-distance relationship and are now living together in New York City. Whenever they visited each other, they would indulge in their love of food and restaurants, which led them to run a blog together even when they were on different sides of the world.

How did the two of you meet?

We met when we attended the same school in New York. We were put in the same class and became friends, though nothing more than that. Only on Ben’s departure in May did we realize that there were feelings for each other that went beyond friendship and now, 20 months later, here we are!

How did you keep the romance alive in your long-distance relationship?

Skype is a wonderful tool and in today’s modern world, it’s impossible not to stay in contact! We would use Whatsapp and iMessaging to keep in touch on a regular basis and we would organize a time to see each other on Skype every evening.

(Nomad Wallet note: these tools are all free.) 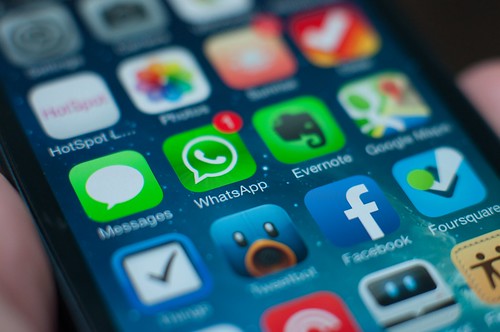 How long did you do the long-distance thing?

We were apart for 19 months, which included several trips to see each other in our own respective countries. From the very first day we got together, the plan was always to shorten the distance and we settled on New York pretty quickly as the ideal destination.

Ben looked for jobs and got far with one, but the stumbling block of a visa and the financial effort the employer would have to make in order to obtain it put a stop to any of those plans.

Ben eventually applied to study in New York, and his top choice college accepted him and he starts his studies in January!

You both run a food/travel blog together. How did you coordinate this from two different continents?

Living in two different continents was one of the reasons we started our blog. The food in America is largely different from that in England, as are the concepts, so we wanted to highlight the differences whilst we were apart.

We would review places that we individually visited in our own respective countries and also the places we visited when we were together. Although they may have been dates for us, we never write them as such for the blog — we review them from a critique point of view, rather than from a relationship point of view.

How often did you see each other? How did you arrange your leaves from work?

We managed five trips to see each other during our 19 months, but they were relatively long trips, totaling around 22 weeks together. So, on average, we would see each other one week for every three we were apart, which doesn’t sound too bad compared to those who are separated due to military tours or otherwise. Thankfully we had very flexible schedules where we could fit in lengthy excursions to see each other, but the majority of the time we were apart.

What do you do for a living? How do you save up to travel to see each other?

Ben worked for three years prior to meeting Alex so he had a reserve of money that helped with all the expenses involved with traveling and long distance-relationships.

During our long distance, Alex worked as a temp and at her school so saving money came naturally, particularly when we had no bills to pay or overheads to manage. We live at home with our parents and we don’t drive, so there are no bills leaving our accounts.

(Nomad Wallet note: I love this! I believe housing and transport costs are the best areas to focus on when you’re trying to save money.)

When you visited each other, was it always either in the U.S. or in England?

Did you ever plan to meet somewhere else? Why/why not?

We had talked about meeting in a different country but, for both money and travel reasons, it made more sense to visit our own respective countries and use that as a base in case we ever did intend to travel abroad.

How do you keep your travel expenses low? Do you use frequent flyer miles? Do you stay at each other’s homes? What do you skimp/splurge on?

We always stay at each other’s homes, so there is no accommodation cost.

On top of that, we travel smart — creating a budget before our journeys together and making sure we have everything covered, including unexpected events. Even though it can be costly, there’s no doubt in our minds that we have saved significant amounts of money by being wise with our finances and looking for the cheapest deals possible in every aspect of our travels — from the airfare to the places we eat.

Considering that a big part of our blog is finding cheap eats, dining is rarely a concern for our budgets and we’re not exactly big splurgers to worry about anything else either!

Use Travel to Start Talking About Money in Your Relationship
Travel Hacking Basics: 4 Easy Steps to Travel for Free