You are here: Home / Flights (and Other Modes of Transport) / Air Travel Then and Now (Pssttt… It’s Cheaper and Better Now)

As we enter the holiday season, complaints about expensive airfares become more and more common.

But over the last few decades, the price of air travel has dropped a lot. That’s the only reason why almost everybody can huddle together by the water cooler and bond over chats of expensive flights, bad airplane food and pesky TSA agents.

If you were to start talking about expensive flights in the 50s, you’d be greeted by silence and jealous glares. Only one out of five people had ever flown back then.

Flight ticket prices: then and now

Back in the day, the U.S. government used to regulate airfares. It was only in 1974 that regulators decided to let airlines set their own prices, which resulted in competition and price wars.

Looking at ticket prices today, you may not believe this. But since 1974, airfares have dropped by about 50 percent.

Consider this: in 1934, for the privilege of flying on one of TWA’s first transcontinental flights from Newark to Glendale, you’d have to pay $160. That sounds like a bargain, but — if we adjust that amount for inflation — it’s about $2,700 in today’s dollars. And that’s a one-way fare on a flight that made three stops along the way.

To make an even interesting comparison, I looked at how the price of a popular international route has changed over time. 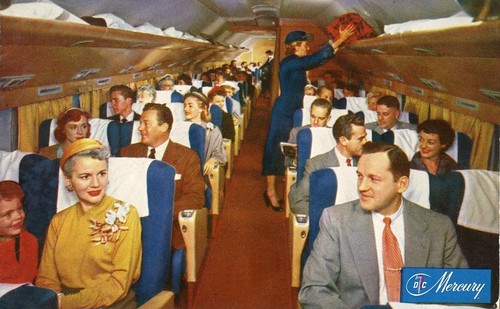 In the 1970s: you’d have to pay $550 to fly the same route. That doesn’t seem like such a big difference, but if you take inflation into account, you’d find that there had been a big discount. This fare would only cost $3,200 today.

In 2013: I just made a quick search at Skyscanner and, even at the peak of holiday season, you could get a return ticket on the same route for about $1,100 on British Airways — fees and taxes included.

(Note: I scoured through many websites and forums to find the historical airfare data, so they may not come from the most reliable sources. But these prices correspond with this graph from a paper that was presented at a geographer conference, so they shouldn’t be too far off the mark.)

But what about service?

Thanks to the airfare regulations, airlines in the past didn’t have to compete in pricing and knew that they would certainly turn a profit. That’s why flying came with the best services. Among them:

So yes, it’s true that some things used to be better back then. But you also had to pay a high premium to fly.

The truth is: you can still get great service today if you’re willing to pay a premium

If you want great in-flight service, you can always spring for business class or first class. (Let’s not discuss the security hassles because, arguably, they’re there for a good reason.)

With another quick search at Skyscanner, I found that a first-class New York-London return ticket would cost $4,000 on Swiss Air. Again, this is the fare for a holiday trip, departing right before Christmas and returning right after New Year’s Day. You could get a much better deal if you travel at practically any other time of the year.

Sure, it still wouldn’t be the same as flying in the 50s. There won’t be any altar or other pieces of furniture that are not bolted to the floor, for example.

But it comes with modern facilities that we take for granted, like in-flight movies and, on some flights, even power sockets and wi-fi. I’d choose these things over altars any day.

Either way, the price of a first-class ticket today is still lower than the inflation-adjusted prices of yesteryear. On top of that, now we could make use of frequent flyer miles, which didn’t exist until the late 70s.

Wait, don’t go yet! I have an announcement to make.

I finally caved and made a Facebook page over the weekend. It’s feeling rather lonely now, so please be a friend and take a quick look over there, will you? Thank you. :)

Affording Travel Interview With Andrew: Surgeon and Luxury Travel Aficionado
A Fake Wallet Can Save Your Traveling Butt for Real