You are here: Home / Handling Money on the Road / 5 Practical Travel Lessons I Learned from a Taiwan Trip Gone Wrong

When the lines of people in the aisles thin out, I got up and scanned the plane. I spotted a flight attendant who didn’t seem too busy.

“Excuse me,” I said, “could you tell me what ‘Internet cafe’ is in Chinese?”

I spoke a little Mandarin, but not, by any stretch of the imagination, fluently. I repeated what the flight attendant said a few times, then handed him a scrap of paper, “Would you mind writing that down for me?”

It was a little after 4 a.m. and I had no idea I was about to experience a series of unfortunate events throughout the day.

All I knew was that I was going to spend the next 19 hours in Taipei by myself. It was exciting.

I was flying from Sydney to Vancouver, where I would meet the boyfriend and spend the holidays. Coincidentally, my China Airlines flight had a rather long stopover in Taipei and it seemed like a waste to spend it at the airport.

I had a mini-itinerary of two places to visit: the National Palace Museum and Taipei 101. My roommate, who hours ago had driven me to the Sydney airport, had also told me that there was a great 24-hour bookstore that I could visit in the wee hours of the morning.

I had exchanged $50 AUD into the local currency. If that wasn’t enough, I figured I would be able to easily exchange money at Taipei 101.

I was set. Or so I thought.

After passing the immigration check-point, I approached the information desk. “The buses come at 7,” the woman said.

Lesson #1: Check the bus schedules; not just the fares.

Screw this, I thought, I’m not wasting three precious hours sitting here in this empty hall. I sauntered over to the taxi stand and quickly got a cab. I gave the taxi driver the bookstore’s address.

During the ride, I learned that Taipei proper is a 45-minute ride away from the airport, which meant the cab fare would blow my transport budget. I nervously watched the meter as we cruised the lonely streets.

Lesson #2: After the bus schedules, check the map. And alternative transport options.

After checking out the bookstore, I made a quick breakfast stop, then set out on my mission to find Internet connection.

The boyfriend, who was waiting for me in Vancouver, had requested that I call him as soon as I landed, but I couldn’t find a working network at the airport. I was worried that he might be getting worried.

For the next hour, I asked various strangers for directions to the nearest Internet cafe in my rusty Chinese. Each person gave me a different answer and I kept confusing the Chinese words for “right” and “left” with each other. Eventually, I gave up.

Tired and disoriented, I decided to take another taxi ride to the National Palace Museum instead. I wouldn’t have enough money for the ride back to the airport anyway, I thought, so I might as well spend what I have and get more later.

By the time I got to Taipei 101 that afternoon, I had taken three taxi rides and was running low on local currency.

But I wasn’t worried. I mean, here I was inside one of the tallest buildings in the world; surely they had a money exchange booth or two.

I dropped by Starbucks and finally Skyped the boyfriend, letting him know that I was exhausted but alive.

Then I tried to find a currency exchange bureau, only to be disappointed by the second information desk of the day.

Apparently, only one exchange booth was open because it was Sunday. And they didn’t want my Australian and Canadian dollars.

Lesson #4: If you’re going to rely on cash, at least bring some U.S. dollars.

After pleading with them and finding no sympathy, I found a bench where I could sit down and contemplate my next move. Obviously I had no chance of properly explaining my plight in Chinese, so I had to be more creative.

In my sleep-deprived state, it somehow seemed like a good idea to go to the only English bookstore in the building and stalk people until one of them takes pity on me.

So I hid behind a shelf and opened a book, pretending to read as I spied on people through the shelves.

I listened in on them to make sure they were speaking English. I ruled out whole categories of people based on sweeping generalizations. Families might not want to let a suspicious girl near their kids, for example. Or teenagers might not have any money. 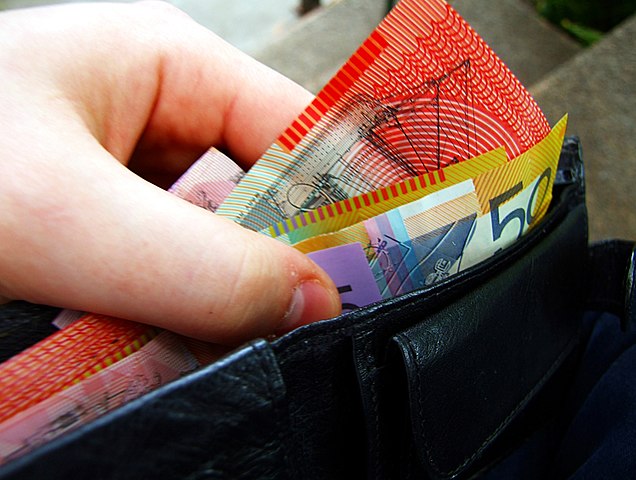 I had limited time if I wanted to make my midnight flight, so I made my move.

“Hi guys,” I half-smiled, half-sighed, “this is gonna sound a bit suspicious, but I need a favor.” I then told the two Australians my story.

As it turned out, they were happy to help me, but they also told me that they had been using their Australian Commonwealth Bank ATM card with no problem.

“I have no idea you could do that,” I said. “I’ll just find an ATM and not trouble you, then. Thank you!”

Several levels down, I waited in line by a busy ATM machine, finally inserted my Commonwealth Bank card and keyed in my PIN, only for the machine to spit out a piece of paper full of tiny Chinese characters.

No money came out. Dammit.

Lesson #5: Bring back-ups — lots of it. Have at least two credit cards and two debit cards. And call the banks before the trip so they know your travel plans.

So I went back to the bookstore to find new  saviors.

I used my trusty spiel on two South Africans. “So…would you mind exchanging money with me?,” I asked at the end.

I must’ve looked convincingly worn out. They looked at each other and the lanky one pulled out his wallet. “Sure,” he said.

“Really? Thank you so much!” I could feel the tension leaving my body and I suddenly felt tired. Very, very relieved, of course, but tired regardless.

“I would be really stressed out if I were in your situation,” he shrugged. “So how much do you want to exchange?”

“Hmm.. Let’s do Australian. I really wanna go there someday. And how much is the exchange rate?”

I told him how much I got for $50 AUD from the exchange booth in Sydney, then started to pull out the receipt from my bag, but he was already handing me the money. He didn’t have exact change, so he even gave me a little extra.

They then suggested that I catch an airport shuttle bus instead of a taxi and gave me detailed directions to the bus stop. “You’ll pass through a hotel, so you can ask the reception desk if you need more directions.”

I thanked them, said my goodbyes and made my way to the bus stop. Minutes later, I was gazing out the window of a comfortable (and cheap!) shuttle bus. I actually had some time left if I wanted to go up to the top of Taipei 101, but I had had enough for the day. I was just glad that I survived my trip, thanks to the kindness of strangers.

How 5 Location-Independent Bloggers Afford to Travel
Affording Travel: How Steve Jobs the College Drop-Out Paid for His Trip to India in the ’70s