Today’s interview features Sean Michael Hayes, who has done some pretty interesting things. An avid traveler, Sean has been to 12 countries in the past 18 months alone, armed only with his backpack and skateboard.

Sean worked as a professional skateboarder before becoming a skateboarding coach. He’s currently busy with his newest project: publishing his first three books. He has just wrapped up a successful fundraising Kickstarter campaign and taken off to Bogota to work on the books.

Tell me about your skateboarding days.

When I was a teenager, I got sponsored by a bunch of companies to skateboard and they flew me around to contests and demonstrations. So that was really my first introduction to travel.

Plus, skateboarders all around the world are like a family. No matter where I am, I know that if I meet another skater, I can trust his advice on reasonably priced (yet authentic and delicious) meals. Skaters also know their home city better than probably any other locals because they spend their whole day traversing it on their board. So for me, skateboarding is still a huge part of my life and travel, just in a different way.

After a few years of really enjoying it, I realized that I was never going to be one of the guys that could retire off his career and so I took a great job in the industry. I was the Team Manager for the top team of skater in the world, Plan B skateboards. From there I was headhunted to go and work for a company called Alpinestarts where I managed their entire action sports devision. It was a great-paying job, with lots of responsibility, but unfortunately, due to poor management there really wasn’t much I could do.

When and why did you leave that job?

When I was 25, I decided to stop putting the outcome of my dreams in someone else’s hands. I had some money saved and I took the time to really think about what I wanted to do. That’s when I decided I wanted to coach other younger skaters and use my experience to help others succeed.

the Amazon at 30, you were working as a skateboarding coach?

Yes. For the past few years, I have been coaching the top skaters in the world. I have helped them win Guinness World Records (Aldrin Garcia), X-Games Gold Medals (Ryan Sheckler) and many other great accomplishments.

Is coaching something you can do as you travel or do you take vacations from it?

It is a little bit of both.  Sometimes when I travel for work, I will use the opportunity to explore.  For example, I went to South Africa last summer for the Maloof Money Cup to coach a skater named Ryan Decenzo.  After the contest was over, I got a ride to Cape Town and backpacked down the coast.  I saw penguins, swam with great white sharks and swam off the most southern tip of Africa.  So really, I just try to tie it all together.

When you travel, do you rely on your savings or work on the road as well?

I try to save some money so when I travel I can be free to explore wherever I am.  Sometimes I work when I travel — I have written a few articles and taught children English — but I try to go as far as I can by living off a small budget.

How do you go from an income of $100,000 a year to only having a few hundred dollars by the time you were in the Amazon? Didn’t you have any savings?

1. It has been 5 years since I sat in that office. So no, any money I saved then I have since put towards other things.

2. A great lesson I learned making the sought-after six-figure income is that when you actually do the math, it’s not that much. Here is a simple breakdown:

So yeah, I guess I wasn’t very wise at the time to begin with, but it also shows you how, depending on where you live, your expenses can catch up with you when you try to catch up with everyone else.

(For ideas on how to save money to travel, check out this page.)

Adding more was not the total answer to happiness. And so now I have become more clear with which of my needs are necessary.

In Colombia, I will be living out of my backpack. That enables me to make friends, stay in cheap hostels, camp, whatever I feel like. It isn’t as though it’s the cheapest place in the world, but it is cheaper than here in California and I’m interested in the Colombian culture. 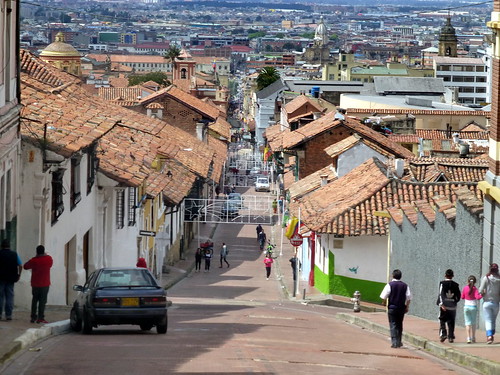 You ran a fundraising campaign for your books through Kickstarter. Your goal was $2,500, but you’ve exceeded that. How do you plan to use this money?

The intitial $2,500 was to help offset some of my living expenses while I finish the final edits of my books. Everything on top of that, I am going to use to publish an exclusive run of Limited Edition Kickstarter Backer versions for all the people that pledged to my campaign. So really, it’s a chance to get your own one-of-a-kind piece of art history.

Do you know the people who pledged to your campaign?

I don’t personally know every person who has pledged. A lot of people are just inspired by what I am doing and want to be a part of it with me. That part is awesome. I’ve tried to connect with each person personally to extend my thanks because I really am grateful for all the support.

Why are you publishing three books at a time?

Because I wanted to do something different and show my dynamic literary ability as a new author. You can Google how to become an author and follow the boring directions if you want to. But I knew that, if I wanted to stand out as an author, I needed to do more than just write great books and it’s been going great so far. I’m excited to keep people updated on my progress via my website. I’m trying to inspire people to be creative and forget that they have to follow the rules, so it only makes sense everything I am doing is different.

Where are you in the writing process?

As far as my books, I finished the drafts a while ago. What I am going to do in South America is focus on refining and editing what I have so far. Like an artist, if my first draft was the sketch of my intended painting, now I am adding the finishing touches to my masterpiece.

Also, my book Five Weeks in the Amazon takes place in the Peruvian Jungle, so being in a Spanish-speaking environment will help me get in the same creative place mentally.

To connect with Sean and check out his upcoming books, visit him at his website. He’s also active on Twitter.

Research Says You Won’t be Able to Travel in Retirement
Trip Booking: How We Saved $230 by Visiting NYC